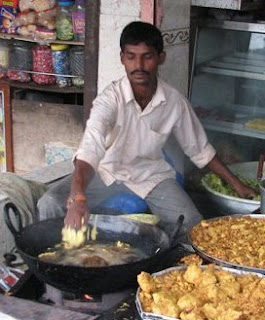 The sight of vadas being fried at platform stalls as the train reaches Karjat station is too tempting to miss. But that will soon change, as Indian Railways plan to ban cooking at food stalls on platforms.

Due to fire hazards and accidents at crowded station, Central and Western railways will open a centralised kitchen for the stall owners to cook vadas, samosas etc., or even make tea.

From CST to Karjat and Kasara on the central line, and from Churchgate to Dahanu road on the western side, no stall owner will be allowed to cook on the platform. They can install microwave ovens and other power-based heating equipment to heat eatables.

According to a daily, cooking on sigris and stoves at stations was prohibited since August 2005, but as there were no written orders, it still continued. Once the base kitchens are set up, stall owners will cook in the centralised kitchen.

As long as its not prohibited to sell vada pavs or any other food at the station, its a fair deal.
Posted by Bhavika