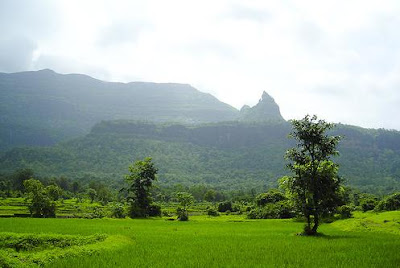 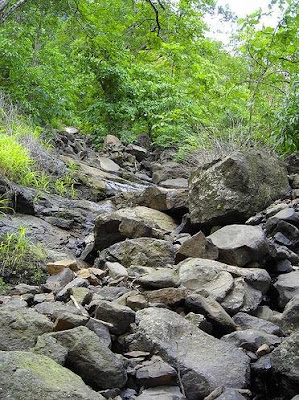 Bhimashankar situated in the village of Bhavagiri, is a famous pilgrimage site at the end of the Sahyadri range. It is one of the twelve Jyotirlingas of Lord Shiva in India. The beautiful stone temple around 3296 feet high and the feeling of being lost in wilderness has made Bhimashankar a major trekking destination.

The area is surrounded by lofty peaks, dense forests and is also the source of River Bhima. There is also Bhimashankar Sanctuary where variety of birds, flowers and animals can be seen.

From Karjat station you need to travel to Khandas village, which is around 40 kms away, either by ST bus or tumtums, plying between Khandas and Kashele.
There are two routes to Bhimashankar from the base village of Khandas, which are most popular among trekkers - 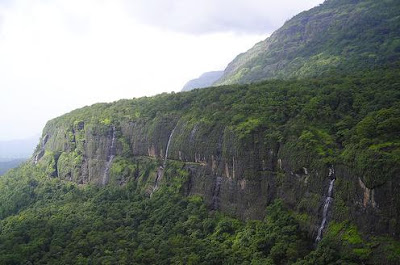 The temple is commercialized due to road route leading to Bhimashankar, through the Pune–Talegaon– Chakan route. The temple dates back to the 18th century, with some intricate carvings adorning the pillars and door frames. Just opposite the main temple, there is a small shrine dedicated to Shani (Saturn), and outside that hangs a huge Portuguese bell, a war relic symbolizing the victory of Marathas over the Portuguese in the Battle of Bassein in 1739. 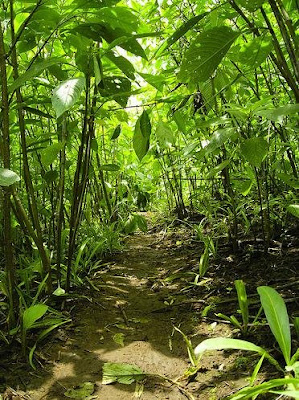 After seeing the temple you can go to the Hanuman Lake, Nagphani Tok (point) or Serpent's hood, Gupt Bhimashankar, origin of River Bhima, Bombay Point and Sakshi Vinayak. Nagphani Point is the highest point in Bhimashankar, and called that because its shape is like a cobra’s hood. So you will get to see the surrounding hills and forts of the Matheran range and Padar killa down below.

The dominant species of flora are Mango, Jamun, Hirda, Behda, various medicinal herbs, Bamboo and fern. The Giant Indian Squirrel is one of the major attractions of the sanctuary. The other species found in the dense forests are Sambar, Barking Deer, Hyena and the Wild Boar. If you love bird-watching, then you will be able to find Malabar Grey Hornbill, Quaker Babbler, Malabar Whistling Thrush, Green Pigeon, and so on.

Places to Stay in Bhimashankar

In case you want to spend a night, few motels like Mansarovar and forest rest house are available or you can camp on open flat spaces near the temple.

Thanks to Selvin for the Pretty Pictures
Posted by Clyde