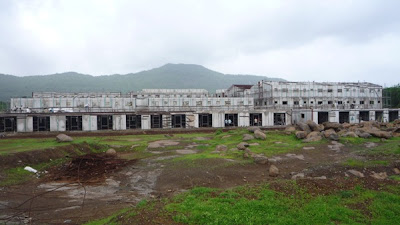 We had spoken about Tanaji Malusare City in an earlier post, with regards to their ambitious skywalk. But overall have not spoken about TMC Karjat in whole about the concept of the project and what exactly it is.

TMC is situated in Karjat approximately 2 Kilometers away from the railway station. But ofcourse they plan the TMC skywalk to touch the station which will basically be a big boon to daily travellers.

There will be a total of 15,000 flats spread over 100 acres including a School, Hospital, a 3 lakh sq.ft mall, multiplex, community hall, piped cooking gas, children’s playground and retail outlets strategically placed around the city.

Take a look at this video where you can get to see the master plan of the city, the location and the inside of a flat in TMC.

The plans of the flats are displayed below: 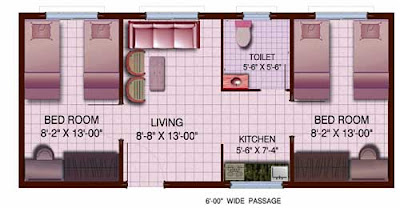 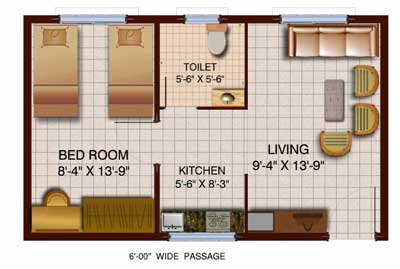 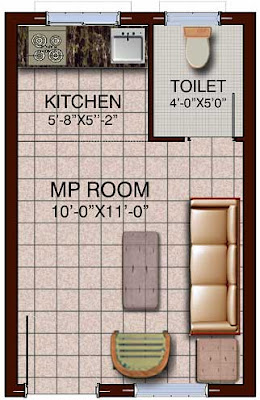 The entire site plan can also seen below, unfortunately its not a high resolution image, stay tuned for more updates on TMC! 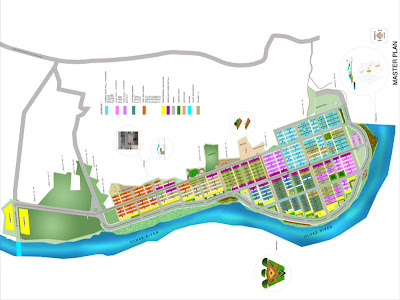 Email ThisBlogThis!Share to TwitterShare to FacebookShare to Pinterest
Labels: Property in Karjat, TMC

Back to the Basics of Ganesh Visarjan 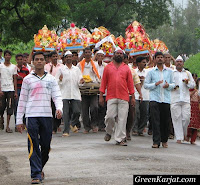 Festivals bring families/communities together as everybody participates in the traditional customs and rituals. This was quite evident during Ganesh Chaturthi, celebrated in remote villages of Karjat. It was a contradicting picture as compared to the hyped up scene in Mumbai, and turned out to be more enjoyable, less noisy and the excitement was palpable.

Every house in the village get their own Ganapati, generally for five days, decorate the idol, conduct puja and on the sixth day immerse it along with goddess Gauri. 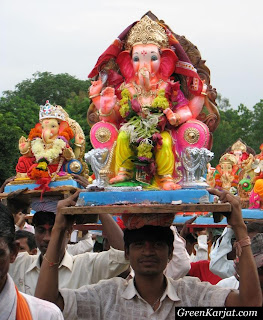 On the immersion day the men in the village carry Ganesh idols, which are placed on a wooden stool, on their heads. While the women follow them carrying idols of Gauri on their heads. 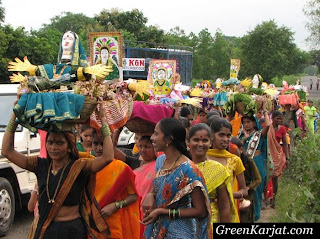 It was interesting to see the way each idol of Gauri was decorated. Some draped saris around the clay statue, donned her with jewelery like nose ring, necklace, mangalsutra, flowers and leaves, while some were carrying photos of Gauri and placed it on colorful baskets.

Singing bhajans they all marched towards Pench river that flows through Karjat. One of the villagers also mentioned that the idols were only made of clay and not any harmful material that can pollute the river. 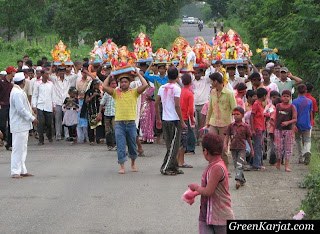 Another village was already performing the last rites of immersion while others peacefully waited for their turn. 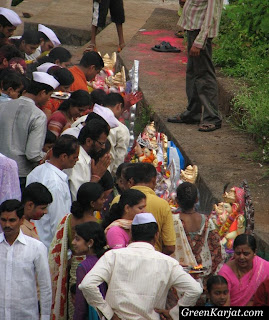 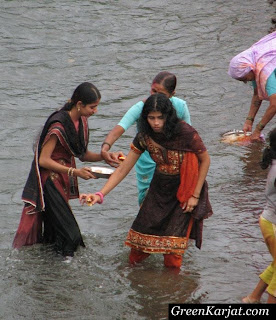 Idols of Gauri placed on the banks of river Pench to perform the remaining rituals. There were similar type of flowers in each of these baskets, apparently the local boys get them from the jungle a day prior to Gauri.
A married woman doing puja of Gauri, considered to be goddess of prosperity and wealth. 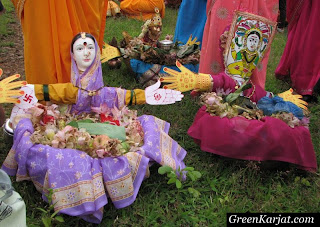 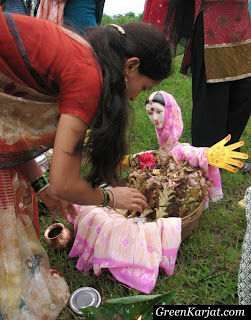 After the puja is done women remove the jewelery and prepare for Gauri visarjan. 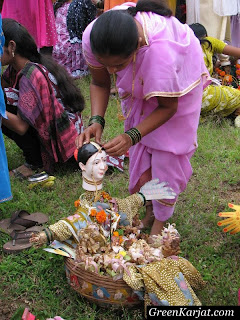 While on the other side men perform the last rites in front of Ganesh by lighting candles, singing bhajans/hymns, break a coconut and preparing for immersion. 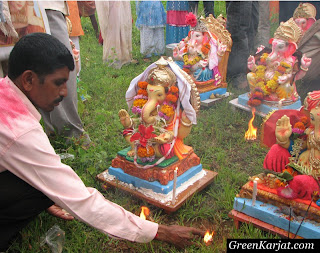 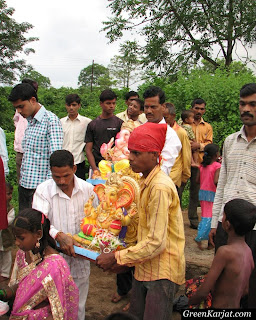 It was much easier to stand close to the river banks to take pictures as compared to Mumbai, where it would be impossible to get close to the sea during immersion. 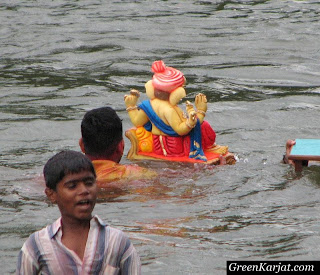 People carried their idols in the river and went as far as they could to immerse it and prayed for Ganesh to return next year. Some kids were just enjoying diving in and going for a swim. 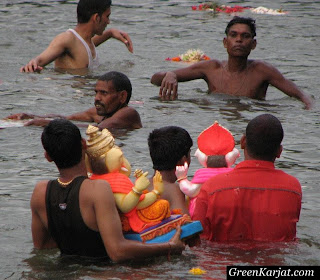 While the women bid adieu to Goddess Gouri, only immersing the idol and picking out the flowers. 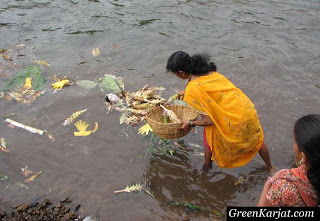 Also part of festivities were young boys who helped with the immersion. 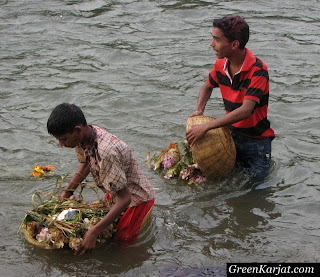 At the end of it prasad in the form of poha, sugar, coconut mixed with banana was distributed among all the devotees. Most of the villages in Karjat follow this, except a few bigger ones who install speakers and an entire music system to start the procession, more like Mumbai style. 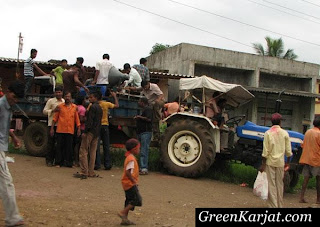 But a simple ceremony, nevertheless that reflects the essence of a community festival. Bringing people together as one was much preferred as compared to Ganesh Chaturthi in Mumbai.
Posted by Bhavika No comments: